Window With A View 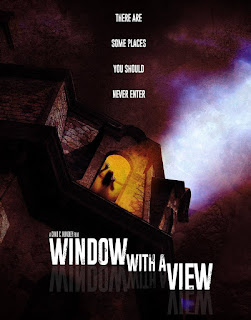 I am very excited to have the opportunity to interview actress Maria Olsen about the upcoming horror feature, Window With A View!

ZE: How are you doing today?
Maria Olsen: Exceedingly well, thank you!! And you?

ZE: How long have you been in the entertainment industry?
MO: Seeing that I first went on stage at the age of 6, I think I've now been in the industry for more years than I can count!

ZE: I've seen your posts and know that this sort of film is right up your alley. What other projects have you done?
MO: Although I've been in a ton of horror features, from what I'm hearing, I'm best known for Starry Eyes, Trophy Heads and Mark of the Witch. I was also in Percy Jackson & The Olympians: The Lightning Thief, and I will be starring alongside Jamie Bernadette and Camille Keaton in the much-anticipated sequel to the iconic I Spit On Your Grave (1978), I Spit On Your Grave Deja Vu.

ZE: What projects are you currently working on besides this one?
MO: Currently I'm gearing up to shoot horror features Sweet Dreams, Desert Shadows and The Crumbs (that's just up until the end of April). The anthology horror feature The Sunday Night Slaughter from An Anti-Hero Production should also be released this year, along with Beast of our Fathers from Menning Films, Charlie Comparetto's Ghost in the Graveyard, Luke Genton's The Bone Box and Barry Jay's Ashes. I've also recently had three films released: Robert Conway's Krampus Origins, Roxy Shih's Painkillers and Rebekah McKendry's Christmas-horror-themed anthology feature All The Creatures Were Stirring.

ZE: What is your involvement in this film?
MO: I'm blessed to be talent on this project, which means that I'm one of the awesome actors that have been cast in the film. I'm thrilled about this because the character I read for was very intriguing, and I am very interested in finding out more about her and discovering what makes her tick! My character's name is The Librarian, but she's so much more than your normal Marian-The-Librarian type...in fact, she's rather terrifying!

ZE: How did you get involved in this?
MO: I saw the breakdown for the film on the IMDB Feature Film Casting Board, and I submitted for the role both directly by email and thru the IMDB website. I was lucky enough to be requested to audition, and I then taped my audition and submitted it to the production team. A few weeks after that, they emailed me to say that, if I liked the script, they would like to offer me the role!

ZE: What does the story mean to you?
MO: I found Window With A View to be a tale that operates on several levels while its intersecting stories touch on several groups of people showing that the actions spawned by the Big Bad's malevolence spans decades. Being trapped somewhere deadly that you cannot escape from is many people's worst nightmare, and the Haunted Orphanage, home to the titular Window, will never let you go!

The film's website goes on to summarize the story as follows:
"Our story begins at a girls' orphanage, with the county sheriff stumbling upon a mass murder scene. 20 years later, four college students goof off outside of the orphanage, when one of the students gets drawn into the house and will not let him escape. The other three, after trying to get in to save him, report to the authorities and an investigation begins, with the force discovering strange information about the house years ago. The student’s brother is called in, who is now a paranormal investigator. He, along with his “Scooby” gang and his brother's friends, re-enter the house. Clue by clue, they are led to the discovery that they are unable to leave the house either. One by one they start to fall victim to the house and spirit that feasts upon their souls, the result of “sin” that was in the house."

ZE: How did the screenplay affect you when you first read it?
MO: I read the screenplay through in one sitting - I always like to do that so that I get a sense of the continuity of the story - and I thoroughly enjoyed it! I'm a very visual reader because I usually see everything that's going on in my mind's eye, and WWAV has some great imagery in it, which is something I'm looking forward to helping create. I also enjoyed the humor in the story, and the more light-hearted scenes act as a pleasant break from all the blood and gore! The backbone of the story - and the cause of all the horrible happenings - is extremely intriguing, and, as I've never quite seen this particular type of villain, it may even be unique!

ZR: What sort of perks can investors look forward to when they contribute to this campaign?
MO: I find the perks that are being offered as part of this project to be extremely exciting as they include - among other things - a chance to have an actual speaking role in the film written especially for you! Other fun perks include personalized video messages, your own personal Easter Egg in the film, annotated copies of the script and sneak peeks at the footage. Product placements and song placements are also up for grabs, as are Executor Producer credits - and these are only SOME of the perks!

ZE: When is this film looking to start production?
MO: I understand that the final round of auditions will be happening this month in Kentucky, and the production team has told me that filming should start in summer.

ZE: With the budget, will the film only be taking local actors and crew, or can people from out of town submit for an audition?
MO: Well, I know of at least ONE out-of-state actor that's lucky enough to be cast : ME!

As I'm not privy to the film's budget other than what's public knowledge on the Indiegogo fundraising page, I don't know how many out-of-state actors the project will bring in.

ZE: A feature film on a budget like this is ambitious. Will further funding be needed for post-production, and promotion?
MO: The WWAV budget breakdown that was uploaded to the film's Indiegogo page does indeed show that post-production would be covered should the film reach its goal. The big question, of course, is "will the goal actually be reached?". This is, of course, where everyone wanting to support indie film comes into things, and Team WWAV would love it if people could contribute and pick up one of the awesome perks, or, if that's not possible, if they could just share the project on social media to get the word out there. Should the goal not be reached - and I've seen this situation many times before with indie films - the filmmakers could decide to make the film with what they have managed to raise, and they'd then launch a further funding campaign to cover post-production costs after principal photography has wrapped.

ZE: Is this a non-union production?
MO: Again, I'm just an actor on this project and not privy to all of the inside information, but, as far as I know, yes, it is.

ZE: Is there anything else you'd like our readers to know about?
MO: I would very much like to introduce the creative team behind the film: Director Chad Hundley : the story is based on a terrifying dream that he had, and he cannot wait to make his dream a reality!
Writer Jerry Williams : carefully worked alongside Chad to help pin his dream-story to the page!
Casting Executive and Producer Cassidy Rae Owens : on a mission to find the best talent ever!
Co-Director and EP Cherokee Hall : will make sure that cast and crew dot all the Is and cross all the Ts! Assistant Director and Production Executive Rhonda Bingham : AD-ing is the hardest job ever, but I'm sure she's up to it! Cinematographer Dillon Patrick : his eyes light up at the thought of shooting in the house! Yes, this is true - watch their pitch video and see!

The link to the Indiegogo fundraising page:
https://www.indiegogo.com/projects/window-with-a-view-film#/

Film's website:
https://windowwithaviewmovie.com/
Posted by Zombie Evolution at 1:56 AM

'The Greater Number' on lulu.com

'The Nocent' on lulu.com